“The Dry” is streaming on Prime

We all have secrets. From the smallest to the most squalid, everyone has a moment, a decision that they dearly wish the rest of the world would never discover. It’s part of being human, and the good news is that for the vast majority of us, our secrets don’t really matter all that much in the grand scheme of things.

But here’s the thing about secrets — if you live in a big, bustling urban environment, you also live with a cloak of anonymity. You can be about your business with minimal worry of being discovered. Small towns, though? The kinds of towns whose best days are decades behind them? The ones that only seem to exist through a combination of grit and spite? It’s damn near impossible to keep a secret there.

Like the doomed Jimmy Gator says in Magnolia, “We might be through with the past, but the past ain’t through with us.” To be through with that past and those secrets, a reckoning is required. Historically speaking, small towns don’t do well with reckonings. There’s too much personal and collective history. The new Australian mystery The Dry is an atmospheric film that dives into the secrets of a small town that bakes in an inhospitable climate.

For twenty years, Aaron Falk (Eric Bana) has managed to stay away. We don’t know what sort of life he lives, but he’s built a respectable career as a Federal Agent. Odds are he’d be perfectly happy never setting foot in Kiewarra again. It’s a small farming community outside of Melbourne, and it’s Aaron’s hometown. He’s got history there.

Aaron has to come back. He has no choice. As far as anyone can tell, his childhood friend Luke Hadler (Martin Dingle-Wall) shot his wife and son. Luke spared their infant daughter, then traveled out into the middle of nowhere and put a bullet in his own head. With a crime that monstrous, Aaron feels that he has no choice but to come home and pay his respects.

There are a few problems, though. The first is that Luke’s parents Gerry (Bruce Spence) and Barb (Julia Blake) don’t buy the theory that Luke snapped, and they ask Aaron to stick around and investigate further. The second is that Aaron has his own cloud of suspicion trailing him. Twenty years earlier, Ellie Deacon (BeBe Bettencourt) drowned in a local river. The circumstances surrounding her death were mysterious, and a note in her pocket implied that Luke and Aaron were involved. 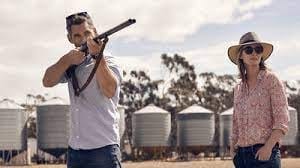 Most of the town blames Aaron and would be perfectly happy for him to piss off back to his Fed job forever. Greg Raco (Keir O’Donnell), the local constable, doesn’t share their prejudice. Besides, while he’s a small town cop who’s a little inexperienced, he’s no fool, and he thinks there’s something rotten in Kiewarra. They’ll discover the connection between the two crimes and the rot baking in the relentless Australian sun.

I’ve been writing about film for a minute, and if there’s one thing I’ve learned, it’s just how much about film I have yet to discover. Until seeing The Dry, I’d never heard of director Robert Connolly. My plan is to remedy that ignorance as soon as is humanly possible. Connolly is a smart and sophisticated filmmaker, and he does excellent work establishing the feel of the sun-blasted town of Kiewarra. Wide shots show us the world these people live in, with fields ruined by drought and smoke from wildfires on the horizon. Connolly takes it a step further and ties the land to the emotions of these people. Flashbacks show us the powerful river Ellie drowned in, and when Aaron returns, we see him walking down a dusty trough with no water to be found.

Those flashbacks are also peppered throughout the story strategically. Connolly and co-writer Harry Cripps provide us information and just the right moments to make us doubt the truth of what Aaron initially finds, along with the truth of what he believes. It’s smart and sophisticated writing that doesn’t exist to simply solve a mystery. Instead, their script shows the layers of human behavior and that everyone has secrets. Those secrets resonate in different ways. 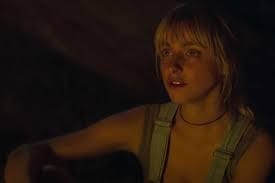 While Hollywood and the media ecosystem are in the midst of massive change, there’s one thing that has virtually never changed. Hollywood loves to pigeonhole actors and freaks out when they can’t. A good example of this is Eric Bana. Originally a comedy sensation in Australia, Bana came to America and did good work in films such as Hulk and Munich. He never quite became a star, and I’d argue that was a blessing, as it freed him up to concentrate on being a strong actor. As Aaron, he carries The Dry with a combination of quiet competence and deep pain. He’s supported by a group of talented actors inhabiting memorable characters, such as the stressed school administrator Whitlam, the local tough Grant (Matt Nable), and Gretchen (Genevieve O’Reilly), the last surviving member of his foursome of friends.

The Dry is more than a rural murder mystery. It’s a cautionary tale about how a small town can be slowly ruined by environmental catastrophe, a drama about reckoning with the past, and a sharp character study concerning a close-knit town. All together, The Dry is a strong and perceptive film that deserves to be seen and cherished.

Tim Brennan
Tim has been alarmingly enthusiastic about movies ever since childhood. He grew up in Boulder and, foolishly, left Colorado to study Communications in Washington State. Making matters worse, he moved to Connecticut after meeting his too-good-for-him wife. Drawn by the Rockies and a mild climate, he triumphantly returned and settled down back in Boulder County. He's written numerous screenplays, loves hiking, and embarrassed himself in front of Samuel L. Jackson. True story.
Tagged: Movie ReviewPrime
OnNashua.com is a directory and information guide for Nashua, New Hampshire.
Discover the best of Nashua shopping, restaurants, night life, breweries, events, business, outdoors, fun, local life, real estate, transportation, jobs, and schools.
Looking for what to do in Nashua? OnNashua.com has columnists, and bloggers to keep you up to date on the best of Nashua, New Hampshire.