My kid Liam is around six months into his thirteenth year. He’s kind, smart, funny, and I can already see that he’ll go much further in life than I ever will. That’s how it’s supposed to be. Also, since he’s taking his first coltish steps in being a teenager, he has Opinions. Many, many opinions about many, many subjects. Which is also how it’s supposed to be.

For example, here’s me camped out in my chair, watching George Clooney’s newest film, The Midnight Sky. Maybe 45 minutes into it, Liam comes in and announces he’s done with school. He asks what I’m watching and what I think of it. I reply with, “Eh, it’s pretty good. Not as strong as Gravity or The Martian.”

Upon hearing that, with rhetorical aggression that would make any Senator proud, he pounced. “That’s not fair to George Clooney.” I thought a moment and replied, “Explain.” He did so, telling me that by immediately comparing Clooney’s film to other more beloved films, I was judging The Midnight Sky on the merits of other works instead of its own. And you know what? He’s not wrong.

You watch enough movies, you start to make comparisons. For example, want a good serial killer movie? Check out Copycat. Is it as good a film as Seven or The Silence of the Lambs? Oh, no. But that dismissive approach is unfair to Copycat, a cracking good little thriller. That’s the struggle. We should always try to deal with art on its own terms…but realistically, how can we? To do that, we’ll need to examine The Midnight Sky and to quote two of my favorite internet personalities, let’s talk about that.*

You know the old saying, “May you live in interesting times?” Augustine Lofthouse (George Clooney) lives in extremely interesting times, which is not awesome for him. The larger problem is the fact that the world is in the midst of ending. A cataclysm of some sort has hit Earth. The vast majority of the population is dead. Lethal radiation is creeping to all parts of the globe, and it’s only a matter of time before our planet becomes a lifeless husk. Bummer.

The more immediate problem facing Augustine is that he’s dying of a terminal disease. When everyone else at an Arctic research facility evacuates, he stays behind on his own. His former life was as a scientist who found planets that could potentially support life. His life has shrunk, and now the plan is to contact any crewed space missions and warn them not to come home. After all that, he’ll run out the clock. 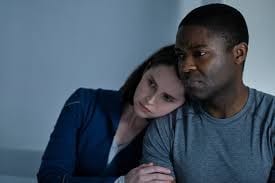 The crew of the Aether is Sully (Felicity Jones), her husband Adewole (David Oyelowo), Maya (Tiffany Boone), Sanchez (Demian Bichir), and Mitchell (Kyle Chandler). For two years, they have been exploring K-23, a habitable world orbiting Jupiter. Nobody on Earth has been responding to their calls, and they’re close to home. With time running out, Augustine must figure out how to contact the Aether and prevent them from returning home.

Here’s the thing about George Clooney as a director — he can be a little inconsistent. Confessions of a Dangerous Mind is bursting with weirdness and Good Night and Good Luck features powerhouse performances and a film that’s effectively about something. The Monuments Men, a World War II movie about soldiers rescuing stolen art should be grand, but it makes a fascinating story sluggish. With every film he makes, he pushes himself a bit more. Here, Clooney captures some gorgeous and well-considered shots. He’s made a film that feels elegant and has some pretty nifty action sequences.

That’s great, yet first of all, The Midnight Sky has a maddening pacing problem. Clooney jumps between three narratives; the Arctic adventure, the space adventure, and flashback sequences involving a younger Augustine.** Ideally, each scene should build on the previous to build up momentum and tension. That doesn’t happen, and long stretches of the film feel sluggish.

Here’s where I’ll get in trouble with Liam. There are numerous sequences where Clooney seems to be lifting from other films. Remember the asteroids pelting Clooney and Sandra Bullock in Gravity? That kinda happens here, only not quite as good. Remember Matt Damon running into numerous technical problems and sweating to fix them in The Martian? Kinda happens here, only not quite as good. It’s tough for me to give this film a fair shake when I can’t help but be reminded of better work elsewhere. 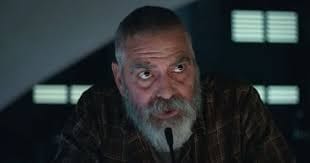 There are also some moments that go past straining credulity and straight-up give credulity a hernia. During the beginning of a long Arctic voyage, Augustine tells Iris to wear an oxygen mask and, under no circumstances not to take it off. A little later, neither of them are wearing the masks and, in fact, never wear them again. A scene involving almost certain death due to hypothermia is ignored.

Getting hung up on those kinds of issues might be a fool’s errand since the script by Mark L. Smith is focused less on accuracy and more on packing an emotional punch. Smith is good at that, as evidenced by his co-writing of The Revenant. At times, his writing creates an effective atmosphere of melancholy, and he does nice character work, particularly with the team of astronauts. The script drifts into schmaltzy melodrama a little too much, and a twist in the third act that’s meant to be impactful just had me saying, “Well…okay, that’s a choice, I guess.” 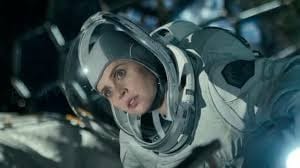 One of the departments Clooney excels in is directing solid performances from his actors. He begins by hiring solid professionals like Felicity Jones and David Oyelowo, the kinds of people you can consistently rely upon to handle action, pathos, and small flashes of humor. Liam and I agreed that Clooney doesn’t have the range of a Christian Bale, and that’s totally fine. He’s the still center of the film, playing a guy who doesn’t say much and emotes even less. Again, no problem, and as long as you know you’re not getting the charming scallywag from Ocean’s Eleven here, you’ll be just fine with him.

After having meditated on the central question surrounding The Midnight Sky, the only conclusion I can come to is a lack of a conclusion. George Clooney has made a relatively good film, which is a monstrously hard thing to achieve. And yet, I can’t see myself watching it again, whereas I’ll watch something like Ad Astra in a split second. I remain torn, and in the end, you know what it all taught me? Having a kid is a pain in the ass sometimes.

* Rhett and Link of Good Mythical Morning are just the best.

** Quick, do you remember what George Clooney looked like 20 years ago? Clooney himself doesn’t seem to, since the guy playing Young Augustine looks nothing like him.

Tim Brennan
Tim has been alarmingly enthusiastic about movies ever since childhood. He grew up in Boulder and, foolishly, left Colorado to study Communications in Washington State. Making matters worse, he moved to Connecticut after meeting his too-good-for-him wife. Drawn by the Rockies and a mild climate, he triumphantly returned and settled down back in Boulder County. He's written numerous screenplays, loves hiking, and embarrassed himself in front of Samuel L. Jackson. True story.
Tagged: Movie ReviewNetflix
OnNashua.com is a directory and information guide for Nashua, New Hampshire.
Discover the best of Nashua shopping, restaurants, night life, breweries, events, business, outdoors, fun, local life, real estate, transportation, jobs, and schools.
Looking for what to do in Nashua? OnNashua.com has columnists, and bloggers to keep you up to date on the best of Nashua, New Hampshire.